The Specialty Of The House Is Truth In Tourmaline 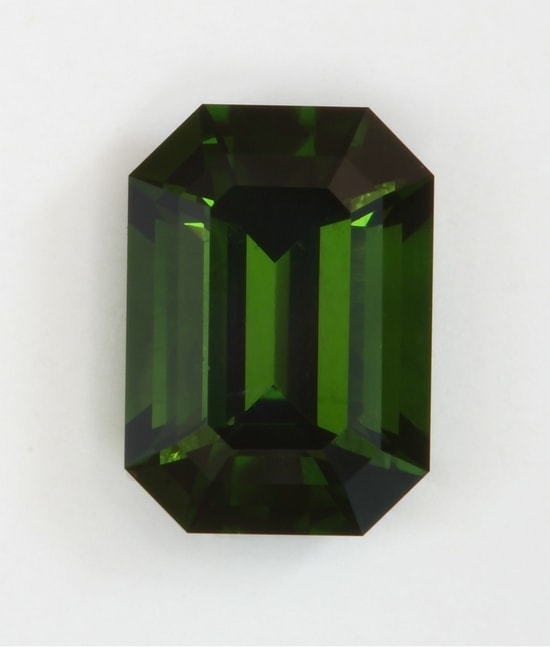 This dark flash driven green emerald cut is a Dravite, the species, and displays the usambala effect. It appears to be eye clean and weighs 1.12 carats.

This is the tourmaline in my collection that I will use in the following discussion on this page. It weighs 1.12 carats.

I would like to start this meal off with a color change delicacy. For most of ten years I have been closely tracking color change in tourmaline. It started when I discovered a new variety of Elbaite, (Lithia Tourmaline), that I have since begun to call Laurellite. It is an unheated cuprian tourmaline that demonstrates a reverse alexandrite color change from purple in cooler natural light to blue/ blue green in warmer incandescent light. (There are more complete and detailed posts on this site, so I will move on with out regurgitating too much).

Finally I found one the other night on a site that I feel is both legitimate and knowledge. It describe a dark, roughly one carat stone that went from yellowish-green in well balanced natural light to a reddish orange in incandescent. The origin of the the rough material was given as the Umba river in Tanzania. Recently, I have continued to find indications that a true red to green color color changer exist in tourmaline. I am on the quest for one to test with my spectrometer. It will have to be a different event than when I found an usabara tourmaline in my collection as I relate in the next paragraph.

While I was obtaining absorption information, with my spectrometer, for all the tourmaline in my collection, I found a green tourmaline that flashed red when I placed my high intensity fiber optic light source on them. Now red flash from a green tourmaline is quite unusual to say the least. (The red flash comes from the intense light being still visible after multiply reflections, that increases the light’s path length within the gemstone.) I have since done a demonstration with a friend to show that I was seeing the usambara effect. I placed my gemstone on top of her gemstone (table to table) and together they turn red, while each separate gemstone was too think/small to switch from their green color, alone. The critical point for not being a color changer is that it was all done under only one light source.