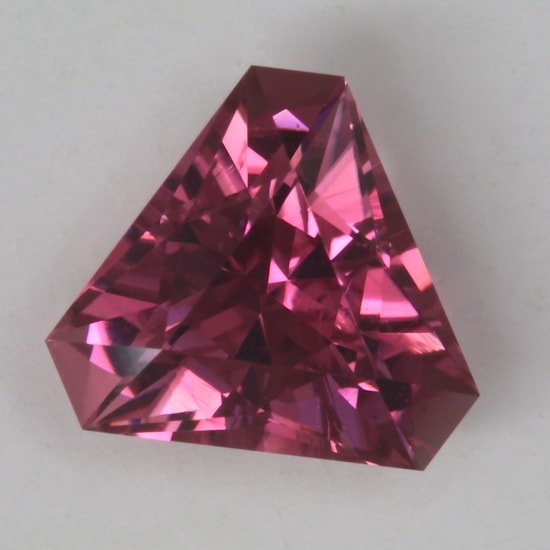 A Tourmaline Tale of Sad and Glad

by My Lady Pink

This report is an attempt to bring the excitement and drama of a youtube video that went viral just a couple of days ago to a wider less connected audience. It focuses on the cutter’s behavior and its impact on an innocent Indicolite, who is the plaintive in the court case against him. From personal experience I know the cutter has crossed the line before and flatter his way out of appropriate punishment. His arguments were flawed then as they will be this time, I am sure, but let us begin, so you can make your own judgment.

The video opens with an expansive view of the small park across from the Tourmaline County Courthouse. The drama builds as the drone’s camera zooms in on me in all my glory. Dressed in graded tones of outstanding pastel pink, I explain with passion the upcoming events in the courthouse who’s classic beauty is framed by wide streets made of cobbled tourmaline stones. It is just a stone’s throw away from the location of my beautifully planned opening shot. I keep my opening remarks brief as I did in this report’s opening, because my beauty is distracting and judge Flatlap has turned his attention to the case of interest.

The importance’s of the cutter to the creation of beauty, an example of this being me, and the heinous nature of the his alleged crime has fill the largest court room in the building with troubled tourmaline. Snippets of well rehearsed stores of the cutter’s curious behavior, grind against my facets as I take my position of honor along with my film crew. No tourmaline seems immune from doubts about the quality of their polish and their fear of being looped. It has even been reported that some included tourmaline gemstones have taken to the bottle, but I have not been able to verify that. They will just will not come clean.

As Judge Flatlap enters and takes his seat of authority the room grows quiet. Only flickering facets seeking mutual reassurance and support from the assembled masses reflect the tension in the air. Will the weak fall victim to the pandemic of fear? We will leave no stone uninvestigated after this commercial break from our sponsor, Lindy A. Nothing beats Lindy A for purity and consistency when you’re in need of a polish on tourmaline!

With my best side toward the camera, the defendant with his entourage of lawyers, all paid for by crowd sourcing, comes first while the solitary Cutter has decided to defend himself. The plaintive, a long ratio emerald cut Indicolite that is so new that he has no standing in the community is heavily cloaked. While the Cutter, a fashion statement as usual, is dressed in finely woven dark umber colored corduroy pants and a rainbow colored tie dyed smock that drapes to well below his well formed hips.

After the spectators, naturally separated into tribes of different colors were called to order, the plaintive was called to the stand. Sworn in on a compilation of faceting diagrams and helped on by leading questions from his lawyers the Indicolite told his story. How the Cutter had demonstrated feelings against him because of its long narrow shape and dark ends. How the Cutter had really tried to position him for cutting, with success and then disregarded his Indicolite nature by completely grinding his pavilion with his coarsest lap. How the cutter had then gone directly to his finest lap before polishing without checking his condition in a completely irresponsible fashion. Topping off this string of questionable actions was a polishing effort that was both shocking and cavalier in nature. While the Cutter caught his predicament at the last moment before being taken off the dope and then in disgust, preceded to terribly manipulate him. He was now afraid to be seen in public. Both compensation and an apology were required to set things straight.

The cutter had been responding to this tale of woe with a degree of sympathy, but there was a diamond like glint in his eyes that said he would not be defeated. He had been in this situation before and his silver tong along with a secret that all complainants shared had never failed him. After a short brake to help compose the Indicolite’s nerves and expel some misbehaving tourmaline spectators, the Cutter was called to the stand. Amid a spattering of cat calls and cheers the Cutter is sworn in. He immediately starts his cleverly constructed defense. He first thanks the Indicolite for giving an accurate account of what transpired from his perspective. Then he freely confesses that he has been experimenting with his limited amount of difficult rough and pushing his equipment and himself to its limits. And yes he had been shocked when he discovered the poor quality of two of the Indicolite’s long thin facets at the very close of polishing the pavilion. With a sincerity that even I responded to, he rose to his feet, stared at the assembled multitude and shouted I did not fail this gemstone.

At first the court was stunned into silence and then pandemonium broke out in the court room. It took awhile to bring order to the crowd and after a few more tourmaline were ejected from the proceedings the Cuter continued. I spent hours bringing all of the Indicolites facets up to a quality polish and adjusted its meets to meet my standards even though long thin emerald cuts are challenging. This effort yielded the largest and brightest gemstone that could be expected from the rough. As I did t he work, my initial concerns that incomplete polish had become a systematic problem with my work evaporated. My experiment with control of the coarse grinding lap and the rate of polish of my new tin/lead lap had come up short because of the refractory nature of polishing indicolite, but it is not a problem with the collection.

As a tremendous shy of relieve from every tourmaline present escaped, Judge Flatlap who had been taking everything in, ask how the Cutter planed to finally prove his case with the plaintive. To which the Cuter replied. Demand that he stand naked under the true lights (daylight equivalent), I have assembled outside the court room, and flash the court. With some difficulty all that had been requested was done and there was no questions left about the cutter’s veracity. The rather embarrassed Indicolite could not help, but shine with that well controlled and stately presences of a finely cut emerald cut tourmaline. After the trial, the barrage of admiring smiles from tourmaline in the know, left the Indicolite so full of himself that he is impossible, but that is another story of the cutter’s glory.