I have been working my way threw the holidays 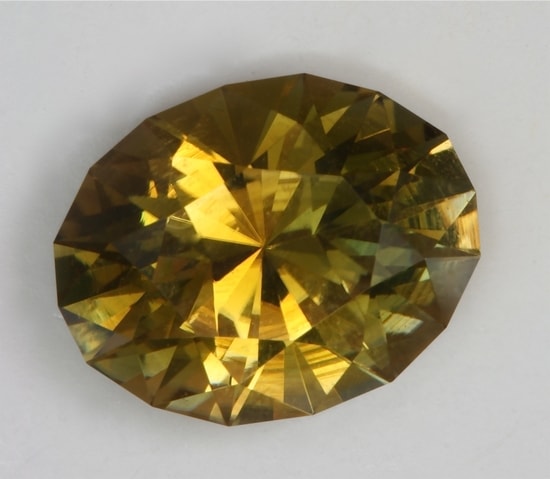 I have been working my way threw the holidays (2013) on a mixture of inter net surfing with some writing and cutting some new pieces of decent rough that I was finally able to get at a significantly higher price then in the recent past. As I worked hard to keep the table from self destructing on my present effort, a modest round, I remembered an educational post from a very very respected laboratory. It pictured a fine blue tourmaline of moderate tone as a tourmaline from Tanzania. My piece is a darker brown orange dravite and a pretty classic example of the type of tourmaline produced from Tanzania outside of chrome tourmaline. Now,my dealer out of Africa rarely supplies locations for the rough anymore, because the practice of lying about where the rough comes from is rampant. Owners of the mines don’t want competition to show up at the mine and buy material that has been stolen from him by his miners and artisanial miners have neither legitimate claims or ownership of the places they did their holes. So now back to a beautiful blue tourmaline with a completely out of place location labeled. Tanzania has never produced such a tourmaline in my experience and doesn’t not have the appropriate geological setting for the production of gem quality elbaite. On top of that, Mozambique, a location that could produce such a stone, has been illegally exporting rough, to circumvent taxes for years and it is right next door to Tanzania. Mozambique is not the only eligible source of the blue tourmaline either.

So why would a lab with such prestige pick a tourmaline with a suspicious provenience in an article directed toward the general public? To show off their collection of superior tourmaline to the world? They are a non profit organization, but they do accept donations for their museum. Well, it really makes little difference why they misrepresented the type of tourmaline produced by Tanzania. To me it represents a complete lack of anything, but a superficial level of knowledge of tourmaline, in the writer. Now even if they had iron clad proof of a Tanzania provenience, I still think that the stones used in a rather light, fluffy article for the general public, should not mislead people about the world of tourmaline.

With all the complaints about the complexity of nomenclature with the tourmaline, I find the level of acceptance of tsilaisite, as a name for manganese tourmaline, to be most exceptional. Tsilaisite is derived from a region in Madagascar, where yellowish tourmaline was found years ago. Tsilaisite is only a PROPOSED name because tourmaline with a high enough manganese content has never been found in Madagascan or anywhere else in the world. There have been exceptional specimens, mostly from East Africa, that have very high levels of manganese and come close to the theoretical level of manganese that is needed to be a different species. When such a discovery is made (if ever), mineralogy will have to come up with a name for the new species, but gemology already has an accepted name for yellow/orange to brown tourmaline, dravite.

Now I am not saying the I like the name dravite for saturated yellows and oranges that lack a brownish cast, but to use a proposed name for a species of tourmaline that has never been found, for yellow, (most of it is elbaite) is a bit much. Still people like the name and no matter how many professional mineralogist rally against its used, I see it defined and discussed often, too often.