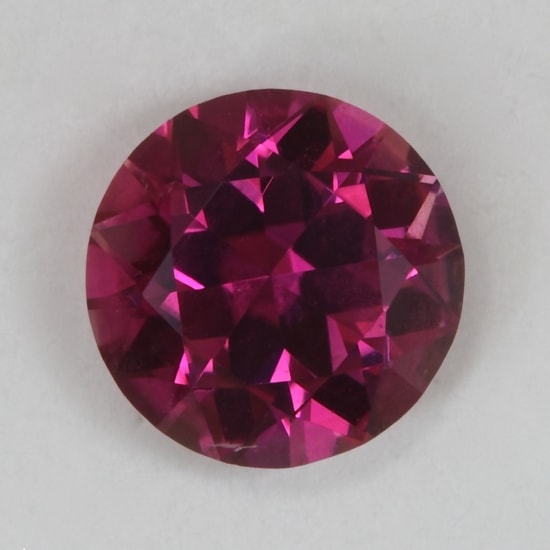 The following effort to discuss a member of the wonderful family of related minerals called tourmaline comes from diverse, mostly informal sources. Outside of direct experience with red tourmaline from Mozambique, I do not have the resources to personally check the accuracy of this information, but it did come from people who should have known the truth. The story of cuprian Rubellite should be told because it says a lot about man’s greed and lost worlds of natural beauty.

When the world of gems woke up to find a spectacular new variety of tourmaline from the state of Paraiba in Brazil was available in the 1980’s, it set the stage for this rare beauty to rocket into the realm of the precious gems. At first there were concerns that the tourmaline, which came to be called Paraiba, was treated to produce its range of violet blue and blue to green, neon colors. While it did turn out that some of the gems were completely natural, the vast majority of gems had been heat treated. ( The simple heating of gem material is such an old and universal process that it is not generally considered a deleterious process.) Even extremely high quality material, with the most desirable blue green color and a medium toned, glow-like quality, tended to have a faint gray cast that could be removed by heating. (Presently it is generally not possible to determine whether a tourmaline has been heated or not so there is no difference in value between heated and unheated material.)

The heating of all tourmaline has risks involved with its physical integrity and the production of an adverse effect on its color and or tone value. With Paraiba tourmaline it turned out that the reduction of manganese from its higher oxidation state I(Mn 3) to a lower oxidation state (Mn 2) (oxidation state refers to the number of electrons associated with an atom.) was the principle effect of heating. This simple reduction of manganese effectively removes the red vector from the tourmaline’s color. (The color produced by copper (Cu 2) in the tourmaline has been reported, by the most recent research, to be unaffected by heating.)

All cuprian tourmaline from its limited number of locations around the world comes in a wide range of colors and tone values. Manganese (Mn 3) is essential for the development of the full range of reddish colors in both Elbaite and Liddicotite, the two species of tourmaline that have so far been identified as having both red non cuprian and cuprian material. The difference of interest here is that heating reddish cuprian tourmaline produces a pale Paraiba range of colors do to its low copper concentration while the complete heating of regular Rubellite generally produces low value, colorless to faintly colored material. In other words no one would heat fine quality Rubellite to increase its value, while heating cuprian Rubellite maybe a different story.

The rising demand for Paraiba tourmaline did not come from advertising the discovery of a rare form of tourmaline. Very few, if anyone, paid high prices for a tourmaline in the 1980’s or today, just to have an example a new variety of tourmaline. Going farther, I don’t think it was even the blue green color of Paraiba, which is not unique in tourmaline, was the selling driver. (I have personally seen blue green tourmaline from Afghanistan/Pakistan that has the identical color of blue green Paraiba and it does not contain any copper.)

So what makes Paraiba tourmaline’s have present day values, on the order of magnitude of precious colored gems such as emerald and ruby, besides rarity? In the best examples it is a unique blend of a desirable, vivid color with a medium tone value and a glow-like quality. (I have seen this glow-like quality in sea foam tourmaline from Afghanistan, but not at the level of quality Paraiba.) The key word here is quality.

As Paraiba prices left all other varieties of tourmaline in the dust, even low quality, pale blue green cuprian tourmaline from Paraiba demanded a good price. To get that good price for the very limit output of the mine every color of tourmaline was heated regardless of the quality of the resulting gem. Wonderful ruby red Rubellites were among those sacrificed. Even purples good enough to be featured on the cover of magazines disappeared into the various grades of blue green Paraiba tourmaline threw heating.

Does the heat treatment of cuprian ruby red Rubellite really matter, if it appears to be identical to regular ruby red Rubellite? (In other words copper is not a significant chromophore in any red tourmaline.) I think it does matter and all is not lost. We must go to Mozambique, where a much larger deposit of cuprian tourmaline was discovered over 10 years after Paraiba. The deposit produced a wide range of colors and the African’s did not have a tradition of heating tourmaline. The limited amount of heating being done and the lack of laboratory analysis of any material lead to the selling of unheated material for years. (Some Paraiba also was sold unheated at first.)

I was very actively buying tourmaline rough from the year 1998 onward, with an emphasis on all the different colors I could get. The source for most of the tourmaline I purchased was Mozambique. In the next few years, after 2000 and before the GIA announced the discovery that Mozambique produced gem quality cuprian tourmaline (In material I supplied them), I was able to purchase red/pink tourmaline, that I have come to suspect is cuprian. The extent of my acquisitions is still unknown to me because my spectrometer does not have a range of analysis that extends far enough into the infrared part of the spectrum to confirm the presence of copper in red/pink tourmaline. (I do not have the same problem with other colors because they do not contain high levels of Mn+3 which can produce portions of absorption curves similar to copper in the near infrared.) I was able to have tested, by a more capable spectrometer, a couple of large tourmaline gems. One of them, a large medium pastel pink is not exceptional to me while a rich purple red, that looked cuprian to me, was confirmed to be copper bearing.

I was also able to have my best red tourmaline from the large 1980s find in Nigeria tested. It did not show any indications of the presence of copper. And then there is a select group of smaller bright red Rubellites that my spectrometer indicates could be cuprian and were purchased in the right time frame when Mozambique was producing cuprian material.. I would like to say they come from Mozambique, but the source of material in Africa is generally difficult to determine. Is this group of bright red Rubellites significantly different by eye from the rest of the Rubellites in my collection? After being able to consistently picking them out by eye in the trays filled with reds and mixed colors, I would say yes. They are not really different in color from red tourmaline without the rather common purplish overtone, but they have a brightness that is exceptional. They are all have a medium tone level, which could contribute to their brightness, but they are not pink.

I have hope to the point of believing that these modest gems are examples of all the lost beauty that the greed of man transformed into low grade Paraiba. The trade is getting more sophisticated and I do see pink cuprian tourmaline for sale. Maybe there is hope that these beauties will remain as nature created them, even if all of their clean purple cousins are heated in a puff of smoke.