Color Change With A Twist 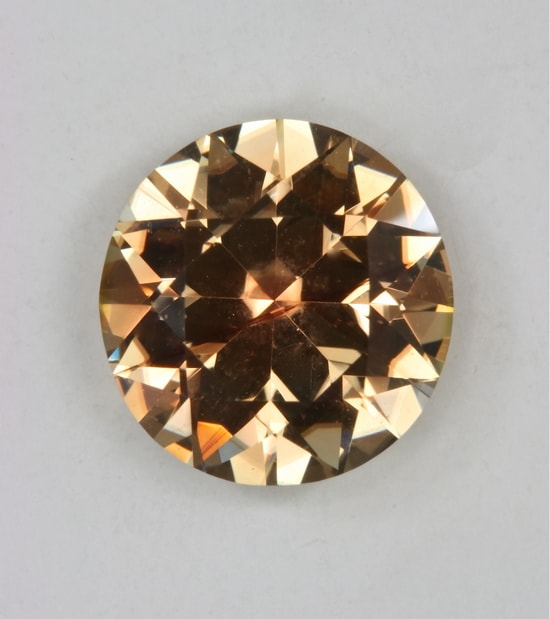 A Special Tourmaline.
Color Change With A Twist.

There are pieces of rough that will never be cut. They may have come in a lot or by themselves and it is sad to see them site on my kitchen windowsill rejected. The piece of rough that came to be the special tourmaline in this story spent time on the windowsill and then was even more deep buried away. I was surprised to find it again the other day and after a close examination, I realized why it had not been cut before. The piece of rough, shaped like a rectangular loaf of bread, had been tumbled and then had a corner almost completely ground off. The almost missing corner made it difficult to retain any of the pink that the pink/yellow/ green tri-color rough had to give to a finished gem. It was also flawed to the point of having eye visible fissures on its tumbled surface. The rough did have some redeeming properties. Its green and pink colors were clean and bright with an under tone of yellow, It had good quality crystal despite its flawed nature so even if I lost the pink, I could get a little yellowish green gem for my effort, or so I thought.

In response to my very limited number of opportunities to cut interesting tourmaline at present and despite the possibility of a complete failure due to the fractures, I decided to give it the old college try. Physically the cutting of the pavilion went well, but I was only able to retain a purer pink tone in one corner. Only about a third of the smaller emerald cut had any indications of pink at all. The remaining two thirds of the gem retained its greenish hue, but the whole gem was loosing its medium tone level and growing purer yellow. After recutting the emerald cut’s ends to eliminate some minor flaws, I confidently started grinding the crown. The fracture of principle concern soon appeared close to the girdle on one side of the long facets of the gem. It was not that noticeable and even appeared to be able to be removed by lowering the crown angles. I did not believe that it could be remove and as soon as I stared polishing its facet, it broke out. It did not threaten the table or even the row of step facets around the table, which had polished perfectly. It did threaten the girdle, which I had deliberately left thicker than normal.

The question of the day became, is it worth the effort to try and grind out the worst of the flaw by increasing the angle of the girdle row of facets or should I just finish polishing the crown and risk the gem’s rejection for the collection. The gem would weigh in at less than a carat and had lost most of its potential as a tri-color, but it was different. In an act that I had never done before, I drop angles and retained the polished table. I credit this decision to my pigheadedness and an excessive focus on getting the best gem I can get out of a piece of rough, no matter how modest it might be. I was able to grind out the worst of the flaw while retaining the polished table and a good girdle, but as soon as I started polishing it again, the flaw opened up again. I do have my limits and it had been reached, so the gem was soon sitting in a cup of alcohol ready to be cleaned and examined.

The early spring day of the special tourmaline gemstone’s completion and examination was crisp and full of sunlight. I would take the newbie on my daily walk and get my first real look at the finished gemstone. A broad smile creased my faced as the gemstone preformed acts of color that thrilled the audience. In the shade, I could see a veil of pink over about one third of the emerald cut and a veil of green over the other two thirds of the emerald cut. The fracture had little impact on the gem even when I looked for it. All this was nice and assured a place in the collection for this wayward gem, but it really did not make it special. It was when I presented the gemstone to the full force of the sun, giver of all life on earth, that I was amazed. It turned completely vibrant yellow without a veils of any color.

I have come the to conclusion that yellow and its counter intuitive creation by the blending of green and red to be critical to color change in at leased some gemstones. This includes both Laurellite and Alexandrite. Still I never expected to get a tourmaline gemstone to display yellow’s creation so clearly. And so a small flawed tourmaline, through the glory of color has beaten the odds and become a special gemstone. I am rewarded.